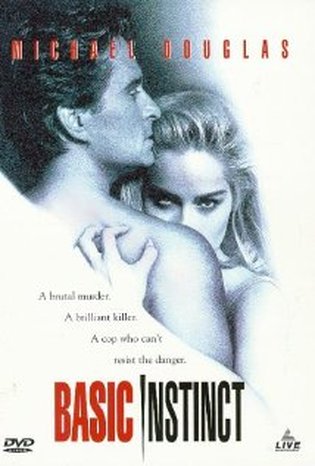 Tramell is the major suspect in the murder of her rock star boyfriend, and shows no emotion when she is told of his death. She is a crime novelist and knows plenty about police procedure and the criminal psyche - and has just published a book that seems to predict many facets of the crime. She ties the detectives in knots and is a very worthy adversary (see clip below, right).

Despite his own suspicions and those of his colleagues, Curran, a wayward cop, can't help falling under her spell and embarks on a dangerous relationship with her, leading to plenty of tension and suspense as the story is unveiled.

The movie upset plenty of people, from gay rights activists disgusted that Trammel was portrayed as a bi-sexual killer, and the graphic violence and supposedly 'pornographic content' made it controversial even before it was released. The box office said otherwise, and the film is something of a classic for anyone with an interest in the wiles of the female psychopath. Don't be put off if you were unimpressed with Basic Instinct 2...

Classic Quote:
"You know I don't like to wear any underwear, don't you, Nick?"