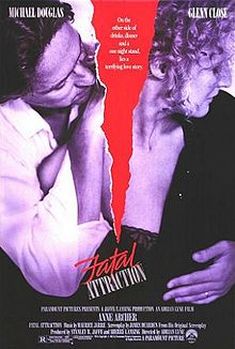 Fatal Attraction is an eighties psychological thriller with elements of a horror flick thrown in for good measure. The formula works well. Critics were generally impressed and the film received six Academy Award nominations. Glenn Close, as the femme fatale, Alex Forrest, should have won Best Actress.

Michael Douglas plays Dan Gallagher, a New York attorney, who becomes the unwitting victim of Alex's psychopathic obsession after making the mistake of having enthusiastic sex with her in her kitchen...

Alex is, of course, totally unimpressed that he is a married man and refuses to allow their brief affair to die. She is clingy in the extreme, attempts to manipulate him with a suicide attempt and then a pregnancy ploy...

She just will not give up and uses all the tools in the psychopath’s armoury to win her man – from emotional blackmail, stalking and intimidation, all ultimately leading to the inevitable violence.

Beth, Dan’s wife, is not spared and ends up entangled in a vicious triangle with Alex. The police seem powerless at every stage because Alex is cleverly manipulating the circumstances, and only when things reach the very violent end game are they able to intervene - ineffectively.

If you ever wondered about the term ‘bunny boiler’ then you need to see Close’s psychopath in action. Classic thriller. It was probably responsible for a major reduction in illicit one night stands by errant husbands throughout 1987!

Classic Quote:
"This is not gonna stop. It keeps going on and on..."