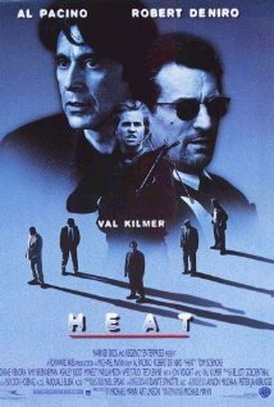 
De Nero's MacCauley is a professional thief who has no aversion to killing anyone who jeopardizes his ongoing pursuit of loot. There is plenty of violence, backstabbing, betrayal and thrilling chases to quicken the pulse, and the combination of the two heavyweights - Pacino as a cop and De Nero as the villain - was an inspired act of casting.

In the one head to head scene where they really engage, they both reminisce about their respective careers ruining their prospects of domestic bliss. The truth is that both are thrill seeking adrenalin junkies, and MacCauley is incapable of experiencing the depth of emotion necessary for a committed relationship anyway.

In true psychopathic manner he is intent on his objective to the detriment of everything else, including his own well being, and, when the going gets tough he has no compunction about abandoning the woman he supposedly loves.

He demonstrates a lack of emotion throughout, rapidly calculates the odds in stressful situations, and takes whatever action he deems necessary to survive, including executing innocents - right to the thrilling finale.

This is a partly a crime caper, partly a revenge movie, and partly a psychological thriller. The whole works on all levels and De Nero is superb in his murderous psychopathic guise.

Classic Quote:
"What if you do got me boxed in and I gotta put you down? Cause no matter what, you will not get in my way. We've been face to face, yeah. But I will not hesitate. Not for a second."