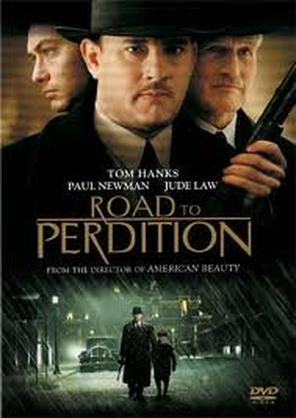 This costume crime drama is slightly different fare to the others listed here. It is a more sedate, thoughtful movie, although chock full of killer characters in Chicago gangland during the thirties Depression. The movie is stylized and too slow moving for some, but the theme - exploring how a violent father influences his own son's choices - is a powerful one.

Tom Hanks plays mob enforcer Michael Sullivan - parent of a young boy who witnesses a killing, throwing his father into an untenable position whereby he has to choose between his crime boss's family or his own son.

The upshot is that Sullivan's family are attacked and deaths ensue, although he and the boy live to flee. Father and son then undertake a crime spree, hitting mob run establishments, with the intent to create friction between crime bosses and thereby mop up their own problem.

However, Harlen Maguire is tasked with hunting down the Sullivans, and Law performs the role of hitman in a creepy yet brilliant fashion. His day job is crime scene photographer and he is clearly fascinated by the deaths he witnesses. He also likes to photograph his own victims, and dispassionately smothers one of them by holding a hand over his mouth while pinching his nose.

Sullivan discovers to his detriment that Maguire is as relentless in his pursuit as he is ruthless in the execution of his targets. It may be slow moving, with director Menendes's camera work loitering to create and art film standard, but it is well worth the time.

Jude Law plays the role with quiet menace and an icy demeanour throughout. A great movie psychopath!

Classic Quote:
"I'm something of a rarity."