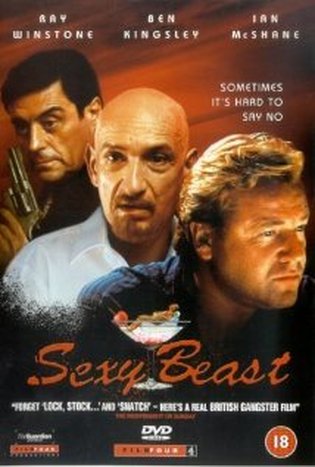 A stylish crime thriller based in Spain and the UK with Kingsley in a role that earned him a well deserved Oscar nomination for Best Supporting Actor. He should have won!

He plays Don Logan, the boss/fixer/recruiter for a London gang tasked with pulling together a team to pull off a diamond heist and he needs the specific  skills of fellow crook, Dove - played by Ray Winstone on fine form. However, Dove has retired to the sun and is not keen to join the team - but Logan won't take no for an answer.

In the bonus material on the DVD Kingsley describes Logan as The Unhappiest Man in the World and has claimed in interviews that he based his performance on a real life character - his grandmother, whom he called "A vile and extremely unpleasant woman..."

A cracking Brit flick with a superbly chilling performance from Kingsley combined with a killer script.

Classic Quote:
"You're the problem! You're the fucking problem you fucking Dr White honkin' jam-rag fucking spunk-bubble! I'm telling you Aitch you keep looking at me I'll put you in the fucking ground, promise you!"