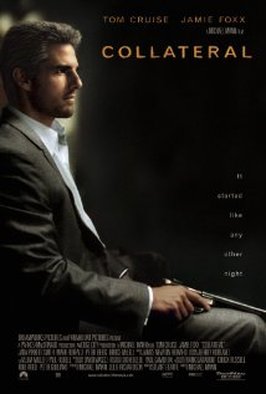 Cruise is a truly versatile actor - within the action genre - and he takes to the role of Vincent the hitman with relish. Jamie Foxx was nominated for Best Supporting Actor for his role as the unwitting Max, a cab driver taken hostage by the psychopathic assassin.

Vincent saunters through the movie, murdering people on his short list, dispatching them with a studied carelessness demonstrated when he fires a killing shot into a prone victim's head without even bothering to check his aim - while in mid conversation with Max.

The total lack of emotion from Cruise's character is counterbalanced by his philosophical musings shared with Max along the way... He is an intelligent yet ruthless individual who let's nothing get in his way - totally remorseless in both senses of the word.

With brutal efficiency Vincent wipes out his list of targets until a final showdown involving the cab driver, his reluctant accomplice.Things don't go entirely smoothly for Vincent and the result is an exciting movie that is definitely not your usual star vehicle for this leading man...

Vincent's character has to be able to get in and out of anywhere without anyone noticing him or remembering him. In preparation for the role the director tasked Cruise with making FedEx deliveries in a crowded LA market without anyone recognizing him!

Cruise is outstanding as an amoral hitman.

Classic Quote:
"Get with it. Millions of galaxies of hundreds of millions of stars, and a speck on one in a blink. That's us, lost in space. The cop, you, me... Who notices?"

Spoiler alert! If you have not yet seen this movie then avoid the video on the right: