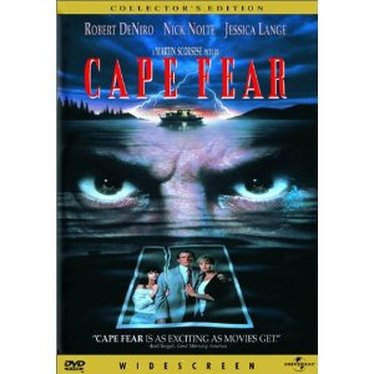 A Martin Scorcese remake of the original with Robert Mitchum as the convicted rapist Max Cady. Mitchum was good but I prefer the more recent take on the movie and De Nero's faultlessly frightening performance.

The  story follows Cady's pursuit of revenge against a former public defender, Sam Bowden (Nick Nolte), who he blames for his fourteen year incarceration. Sam failed to do his job in defending Cady during his trial when he held back a report that may have lightened the sentence. During his imprisonment the illiterate criminal learns not only to read but he studies law and now understands the loopholes etc that he thinks Sam failed to use.

This sets up the conflict between the soft, vulnerable family man - which the rather imposing Nolte carries off very well - and the hardened psychopathic convict obsessed with revenge.

We never know for sure, but the implication is that Sam is cheating on his wife with a women taken hostage by Cady. De Nero studied sexual predators' behaviour for the movie and suggested the violent scene; she is brutally raped, her arm broken and a chunk of her face bitten off, yet she refuses to press charges.

Sam responds by hiring thugs in an ineffective attempt to stop Cady in his tracks (see below right) - but the ploy fails in achieving anything other than escalating the violence towards a chilling and nerve wracking finale.

Another great performance from De Nero who assumes the mantle of a psychopath rather too well...

Classic Quote:
"I ain't no white trash piece of shit. I'm better than you all! I can out-learn you. I can out-read you. I can out-think you. And I can out-philosophize you. And I'm gonna outlast you. You think a couple whacks to my guts is gonna get me down? It's gonna take a hell of a lot more than that, Counselor, to prove you're better than me!"