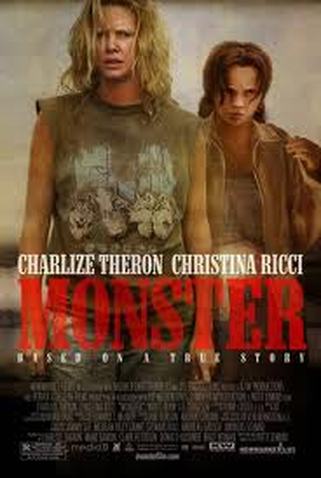 This crime drama is based on a true life female serial killer, Aileen Wuornos, a role undertaken in truly amazing fashion by Charlize Theron - more renowned for her decorative attributes than her method acting: it turned out to be an inspired piece of casting and resulted in a well-deserved Oscar.

Wuornos was a former prostitute who was convicted of killing six men and executed in Florida in 2002. In the movie she has a fictionalized lesbian lover Selby (Christina Ricci) in a parasitic relationship which pretty much forces Wuornos to continue earning money as a prostitute.

Her first killing appears to be a case of self defence as she retaliates when she is beaten by a client. Seizing this new career opportunity, she continues on a similar path, robbing and killing her 'johns' to maintain a new lifestyle for her and Selby. When the latter begins to suspect her lover, after reading about the spate of murders in the news, she leaves Wuornos.

Although based on fact the Hollywood treatment rather corrupts this from a biopic into a 'faction'  movie - a mix of fact and fiction. Having said that, the movie creates a sympathetic portrayal of a women forced by circumstance to rely on the worst facets of her nature - her environment brought out the inner psychopath.

Wuornos's story is a reversal of the usual phenomenon: serial killers often target prostitutes as easy victims who won't be missed. In this case the table were well well and truly turned.

She was vilified in real life for being America's first female serial killer but more for showing up the truth about her victims - the video on the right is the first part of a documentary on the story. However, her portrayal of herself as a victim justifying her violent aggression as self-defence is symptomatic of a psychopathic mind.

Charlize Theron was simply spectacular in this role.

Classic Quote:
" I always wanted to be in the movies..."