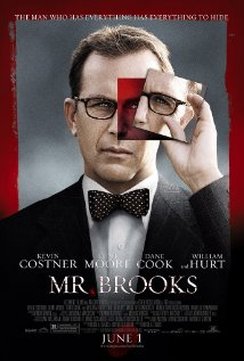 Costner received mixed reviews for his depiction of wealthy white middle-aged serial killer in this unusual yet intelligent psychological thriller - I suspect partly because of the uncomfortable and rarely acknowledged truth that psychopaths exist at all levels of society and hide in plain sight, fooling us all.

He plays a successful bespectacled businessman living the American dream, with a trophy wife and accolades from his colleagues, yet in reality he harbours secret desires.

Brooks struggles to control his urges and has conjured up an alter ego, played by William Hurt, to encourage him to indulge his bloodlust, creating the sense, or illusion, that he really wants to stop killing.

A crisis moment occurs early on when the very careful psychopath makes a mistake and leaves himself open to blackmail form a wannabe thrill killer, Smith. This rather naive gentleman slightly undermines the authenticity of the story as one wonders who in their right mind would try to blackmail a person they had seen ruthlessly dispatch a fellow human!

We are expected to believe this individual, Smith, would not only willingly put himself in harm's way but also asked to believe he really thinks he'll be accepted as an apprentice to Brooks, a very reluctant and dismissive teacher.

The clever plot redeems this one glitch, and Brooks manages to reverse his misfortune and create a false trail for the police. However, lurking in his mind is the fact that he sees a lot of himself in his own daughter, recognizing that she too contains the DNA that drives him...

Despite the slightly tenuous apprenticeship angle, this is an exceptional film that sheds some light on the reality that psychopaths exist in all walks of life, hide in plain sight and indulge their destructive impulses at will. An underrated yet highly enjoyable thought provoking film.

Classic Quote:
"If you don't show up, I will presume that you've gone to the police, and I will kill you. Even if I go to jail because of you, Mr. Smith, someone will find you, wherever you are, and they will kill you."