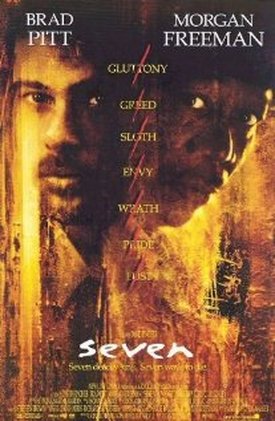 Spacey is not one of my all time favourite actors but he really can pull out all the stops on occasion - and he does so in this film.
The other key cast members are great actors too - how could this movie fail with Freeman and Pitt as two detectives hunting Spacey's obsessive-sadistic serial killer?

Doe's victims are all murdered for offending one of the seven deadly sins of Catholicism:

Although the religious element features in the title and key theme, Spacey's motivations are more to do with a classic psychopathic superiority complex than a slavish adherence to biblical teachings.

Like many Hollywood psychopaths Doe is an extremely clever and resourceful villain. He toys with the detectives tasked with apprehending him, leading them through a meticulously planned and cleverly executed trail of corpses to a shocking climax.

Film critic John Wrathall made this comment, 'Seven has the scariest ending since George Sluizer's original The Vanishing.' He added the movie was 'the most complex and disturbing entry in the serial killer genre since Manhunter.'

Doe is the archetypal criminal psychopath.

Classic Quote:
"After him, I picked the lawyer and I know you both must have been secretly thanking me for that one... This is a man who dedicated his life to making money by lying with every breath that he could muster to keeping murderers and rapists on the streets!"