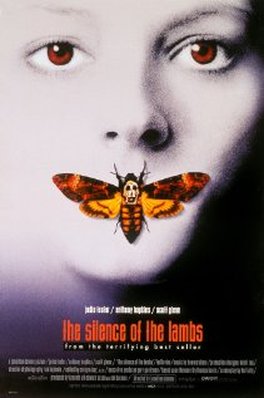 Hopkins is one of my all time favourite actors and he does not disappoint in what must be his most famous role. His chilling portrayal of an intellectual psychopath who toys with Jodie's Foster's newly minted FBI agent, Clarice Starling, is a cinema classic.
​The film is considered 'culturally, historically or aesthetically significant' by the US Library of Congress and is preserved in the national archives.

'Lambs' was the third film to win Oscars in all top five categories: Best Picture, Best Actress, Best Actor, Best Director and Best Adapted Screenplay. I am not a great fan of the Oscar fiasco as it is a nepotistic process dominated by old geezers from Hollywood's major studios - but in this case they were right!

The storyline revolves around Hannibal's participation in the hunt for another psychopath who happens to be psychotic too - Buffalo Bill is modelled on Ed Gein and acquired his nickname from his habit of 'skinning his humps.'

Lecter is enticed by Starling to help in the hunt and although Buffalo Bill is a much less interesting or nuanced character than Hannibal, his role cleverly weaves the paths of Starling and the urbane serial killer together in a dark, frightening and highly suspenseful way.

Hopkins is brilliant as Lecter and this movie contrasts an urbane psychopath with the psychotic version portrayed by Buffalo Bill: Lecter is all the more frightening because he not only could pass for one of us, his skills and intellect would put him near the top of the human food chain...

The screenplay was based on the Thomas Harris novel of the same title, the second of two featuring Dr Lecter. Hopkins later reprised the role in a remake of an earlier screen adaptation of Harris's first Lecter novel, Manhunter.

Classic Quote:
"A census taker once tried to test me...
I ate his liver with some fava beans and a nice Chianti..."