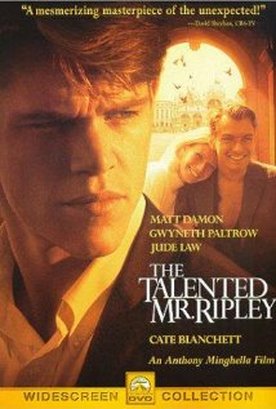 This is a psychological thriller adapted for for the big screen from the Patricia Highsmith novel of the same name, the first of a trilogy published in the fifties. This well written script does the novel full justice, and Matt Damon is well cast in the titular role - he pulls off the psychopath's exploits with real flare.

An intelligent movie and Ripley is one of those endearing sorts of villain who has the audience rooting for him even though he is clearly evil: it happens in real life more often than we think.

The way he insinuates himself into the lives of Marge (Gwynneth Paltrow) and Dickie (Jude Law in fine form), boldly lying, manipulating and cheating his way through the entire movie, is classic psychopathic behaviour.

He not only dissembles from the outset to live a life beyond his own means, he literally assumes another character's identity, demonstrating the chameleon-like nature of the beast.

The film met mixed reviews with many comparing the adaption negatively with the novel. I personally take all adaptations at face value - there is little point comparing two totally different forms of media. I thoroughly enjoyed it.

Damon is a natural in this role - frighteningly normal on the surface but pure menace beneath his attractive facade.

Classic Quote:
"Well, whatever you do, however terrible, however hurtful, it all makes sense, doesn't it, in your head. You never meet anybody that thinks they're a bad person."