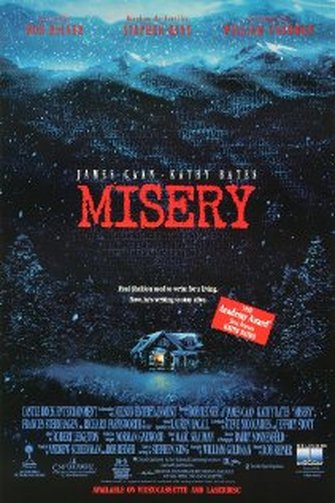 A cracking Stephen King yarn woven into this spine tingling movie that reinvigorated James Caan’s career and brought the highly talented Kathy Bates the recognition she had lacked with an Oscar for Best Actress. Caan plays Paul Sheldon, a best-selling author, who suffers at the hands of Bates’ psychopathic obsessive fan, Annie Wilkes.

Paul is on his way home after finishing his latest novel but crashes in a blizzard, is injured, blacks out and is rescued by Wilkes. That’s just the start of his problems...

Wilkes is a former nurse and a fawning fan, though lies to him about being unable to get help due to the snow - just so that she can tend to him herself. She seems superficially sweet, if a little creepy, but her true nature begins to reveal itself when she discovers the novelist has killed off her favourite character in his latest instalment: she is enraged and insists he rewrites the novel to resuscitate here heroine.

Snowed in and bedridden, Paul starts to do as he is told, but the moment he tries to get free he's rewarded by a form of punishment, meted out by Wilkes, that has gone down as one of the most terrifying yet realistic scenes in movie history. In reality King had written a different form of punishment in the novel but acknowledged after that the film version worked better - thanks to the director's insistence.

This psychological thriller is insidiously horrifying and provides plenty of tension as we find ourselves rooting for Paul in his tribulations with his psychopath nurse.

Bate’s domineering performance set the standard for women actors to measure up to in any subsequent psychopath's role.

Totally brilliant! Another must see movie – if you haven’t already then you should. Bate's is quite magical.

Classic Quote:
"Now the time has come. I put two bullets in my gun. One for me, and one for you. Oh darling, it will be so beautiful."