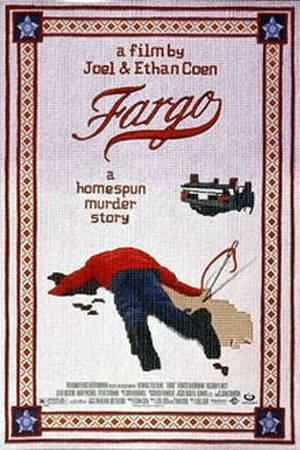 A brilliant Coen brothers movie that garnered seven Oscar nominations with several memorable performances. In 2006 it was deemed 'culturally, historically, or aesthetically significant' and inducted into the national film archives as a result.

Supposedly based on a true story, the Coens eventually admitted that was just a ploy to get audience buy in from the off!  However, that takes nothing away from this cleverly crafted and riveting movie that's full of interesting characters and of course, a classic criminal psychopath.

The plot revolves around the desperate machinations of a loser salesman,  Jerry Lundegaard (William H Macy), who employs two hitmen to kidnap his wife so that he can blackmail his parsimonious, yet very wealthy, father-in-law into delivering sufficient funds to cover the cash he's embezzled from the car showroom he manages.

The two hitmen arrive in Lundegaard's life like creatures from another planet and very quickly things start to go horribly wrong, in true Coen style.

Gaear Grimsrud is one of two hitmen - playing opposite another seedy psychopathic character, Carl, exquisitely played by Steve Buscemi.

Gaear has few lines, but his actions speak much louder than mere words. He is totally ruthless, kills by reflex rather than design, and has a total void where any genuine emotion should reside. Classic axe-murderer type psychopath...

Buscemi is equally ruthless but rather more socialized - but you do get two contrasting psychopaths in this wonderful movie!

If you have not yet seen Fargo then I suggest you buy it/rent it or download it immediately, especially if you like edgy noir crime thrillers!

Classic Quote:
Carl eyes up a corpse on the lounge floor:
"What the fuck happened to her?"
Gaear Grimsrud: [watching TV and eating TV dinner]
"Uh, she started shrieking, y'know. She wouldn't stop..."